The heat range of a pepper typically is affected by growing conditions;  for Habanero peppers, dry conditions that put the plant under stress yields hotter peppers.  Typically Habanero peppers are slow growers, and take around 100 days to become mature. Before they are ripe, Habanero peppers are green; once ripened, they can take on different colors such as white, red, pink or brown, but the most common color is a yellow/orange.

Because of the high degree of heat, Habanero peppers are found in a wide variety of salsas and hot sauces.  When cooking with Habanero peppers, it will be the dominate flavor;  it is the cook’s job to discern complimentary flavors that are enhanced by the heat of the Habanero pepper. When cooking,  you must wear gloves and not to touch or rub your eyes.  The oils from the pepper can irritate and burn eyes and skin.  The peppers can be used fresh, dried, or even in a powder form. It isn’t necessary to cook them, they can be a part of a “no cook” vegetable taco dinner–just make sure to use them sparingly. 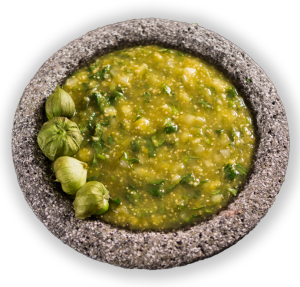 Salsa with tomatillos and habanero peppers

At Scott Street Tomato House, we routinely stock a wide variety of peppers for wholesale:  Bell peppers, jalapeno peppers, serrano peppers and of course Habanero peppers.  Next time you are in your favorite grocery store, be adventurous and select some Habenero peppers.  Check out recipes on the internet to try.  You may just find a new favorite!